For months now, I have been wanting to highlight some of our favorite cruciferous vegetables, such as cabbage, cauliflower, brussels sprouts, kale, and broccoli. I thought I would do that in this column before the weather turns warm and Garden2Table turns its attention to seasonal spring produce and recipes. However, keep in mind that, according to the NMSU publication, Home Vegetable Gardening in New Mexico, these cool weather crucifers should be planted here in New Mexico as soon as the ground can be worked in the spring, which means now. (Alternatively, they can also be planted later in the summer for your fall garden.)

Factoid: The name “cruciferous” is an informal classification of members of the mustard family and comes from the Latin cruciferae, meaning “cross bearing,” because their four petals resemble a cross.

Packing a Nutritional Punch. While cruciferous vegetables are diverse in their tastes, colors, shapes and sizes, they are all rich in fiber, low in calories, and packed with shared nutritional benefits, including vitamins K, A, and C, and minerals, such as folate, potassium, and magnesium. Dark green cruciferous veggies also contain phytonutrients, which is a plant-based compound that reduces the risks of cardiovascular disease by lowering inflammation, as well as cancer by stimulating enzymes in the body that detoxify carcinogens before they damage cells (The Super-Veggies: Cruciferous Vegetables). According to the Academy of Nutrition and Dietetics, it only takes 2 ½ cups of these nutritious veggies a day to reap their benefits. 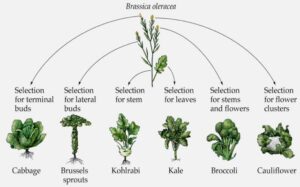 Single Magical Plant Species. Did you know that cabbage, brussels sprouts, kohlrabi, kale, broccoli, and cauliflower all come from the EXACT same plant species: Brassica oleracea. How is it possible you ask? Though they are all the same species, these various crops are cultivars—different varieties bred to have desirable qualities for human purposes. Around 2500 years ago, B. oleracea was solely a plant that grew wild along the coasts of Britain, France, and the lime outcrops of the Mediterranean coast. The wild form still exists and is known as wild mustard.

Later, in Ancient Greece and Rome, around 300 BCE, people started cultivating wild mustard in their gardens and selecting seeds from plants that grew more leaves, which produced a version of wild mustard that looked more like modern-day kale or collard greens.

Over hundreds of years, this one plant continued to be selectively bred to create dozens of wildly different vegetables. Red, green and savoy cabbages were created from a kale cultivar in the 1200s by selecting for a large terminal bud. Brussels sprout, which grow from the buds along the plant’s stem likely, hit the scene in the 1200s as well. Kohlrabi was created by selecting for a thicker stalk in a kale plant around the 1400s. Broccoli was created from a kale predecessor in the 1500s by selecting for the larger flower clusters, which are then harvested before they bloom. Cauliflower was developed from one of hundreds of broccoli varieties. Fascinating!

For those of you who would like to read more about the evolution and diversity of B. oleracea, please check out the extremely informative blog post by Jeanne Osnas, a researcher at Purdue University who blogs as The Botanist in the Kitchen: The Extraordinary Diversity of Brassica oleracea.

New Mexico’s Wild Mustard. Wild mustard has also been found growing in Dona Ana and Bernalillo Counties, but it is not at all like the cool, edible B. oleracea. Known as the Sahara mustard (Brassica tournefortii) or wild turnip, this weed is a short-lived, nonnative winter annual mustard that has become a potential new threat to New Mexico.  According to NMSU, Sahara mustard (Brassica tournefortii) primarily invades disturbed, arid habitats, favoring sandy soils, though it can readily establish in a variety of habitats. Sahara mustard was first identified in New Mexico in Dona Ana County in 1995 and is currently found near Albuquerque and in Las Cruces in parking lots of shopping malls, residential areas, and along roadsides. (We had it on our land in the North Valley, and it thrived in the sandy mounds of a former horse corral.)

Sahara mustard also attracts a bug called the leafhopper, which can spread viral infections to your garden. You will need to be careful getting rid of this weed. NMSU’s factsheet cited above provides guidance on how to manage and control an infestation of this harmful weed. If you find yourself with B. tournefortii, do not think about cultivating it, get rid of it! 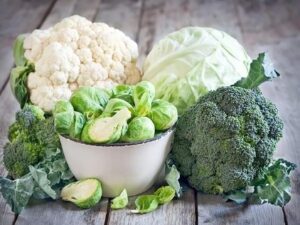 Cooking with Cruciferous Vegetables. There are so many ways to get your crucifers on—raw or grilled, sautéed, roasted, etc. Cauliflower is now being introduced into everything from pizza crust to mac & cheese. Because cruciferous vegetables are often found to be naturally bitter, adding an acidic ingredient, such as lemon or lime juice or balsamic vinegar, will tone down the bitter flavor and make them sweeter and more delicious. And those chewy, fibrous leaves of the kale and Swiss chard can be massaged to make them softer and more tender.

Garden2Table has demonstrated many recipes using a variety of these healthy veggies. Riced cauliflower or chopped, shredded, sliced, or shaved brussels sprouts, cabbage, broccoli, or kale can make a refreshing slaw or chopped salad. Be creative and mix in some garbanzo beans, fresh or dried fruit, herbs, or additional vegetables like onions, carrots, or celery. Then toss with a tangy vinaigrette or creamy dressing, sprinkle with nuts or seeds, and you have got yourself a nutritious, crunchy, and satisfying meal. On the following page, we have included a variety of easy to prepare dressing recipes that can be used to lightly dress the perfect slaw or chopped salad—some mayonnaise- or yogurt-based, some vinegar-based, and some solely plant-based and oil free.

Until next time, enjoy your veggies to stay healthy and strong, and get planting.

Below are a variety of dressing recipes that can be easily whisked or blended to toss with your favorite cruciferous vegetables, such as cabbage, brussels sprouts, cauliflower, or kale. These dressings lightly dress 5 to 6 cups of shredded, shaved or chopped vegetables. Feel free to substitute a cup or two for crisp fruit, such as apples or pears; fresh herbs; or onion, shallots, sweet peppers, carrots or celery. Throw in some seeds, nuts or dried fruit, or spice it up with sliced jalapeno or serrano chile. We also included some recipes for those of you following a plant-based, oil-free, or vegan diet.