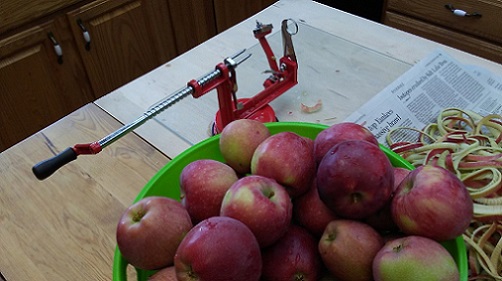 My old apple tree came with the house.

I have no idea of the variety, but it produces some really nice fruit. The poor tree had the bark on one side stripped off by a puppy 15 or 20 years ago, but it has managed to out­live the dog and just keeps on going.

When we first began using the apples, there was a lot of worm damage in them. In those we just peeled and sliced, then discard­ed all the nasty parts. But now I protect the fruit from worms (coddling moth) by spraying with spinosad. This is a biologic insect killer that only affects chewing bugs, so it’s safe for bees, and it’s approved for organic garden­ing. I learned about that in an SCMG class taught by Master Gardner and certified arbor­ist Elizabeth Gardner. I lose very few apples to worms anymore.

Birds are another problem, though. Birds will ruin the entire harvest if you let them. I would be willing to let them have a few apples just for the sake of cosmic karma, but they prefer to eat a few bites from every single apple. If they aren’t willing to share, why should I? I wrap bird netting around the tree, and the birds just have to go peck on someone else’s apples. I learned that in an SCMG class as well, taught by Dr. Sam Smallidge.

So, you can see that I go to a little trouble to get maybe 10 dozen nice apples each year from this little survivor of a tree. We peel, slice, and freeze them for making pies during the next year.

A few years ago, we found an inexpensive little gizmo that makes this process go a lot faster. Here are a few photos from our 2017 apple processing.

A bowl of apples and the $15 gadget that makes prep for freezing a snap. The machine peels, cores, and slices all at the same time. The apple comes off the machine in one long, continuous spiral.

We cut down the middle to make nice-size slices to use for pies.

After a dip in a solution of “produce protector” (such as Fruit Fresh) to help preserve the color and flavor, the slices go into zipper-type plastic baggies for the freezer.

Friends are always impressed when we bring over a deli­cious apple pie that’s not only home-made, but made with apples that we grew. 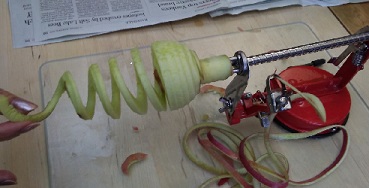 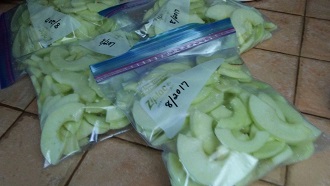 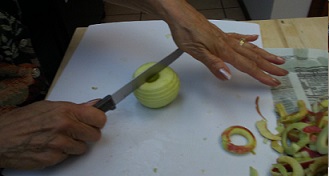