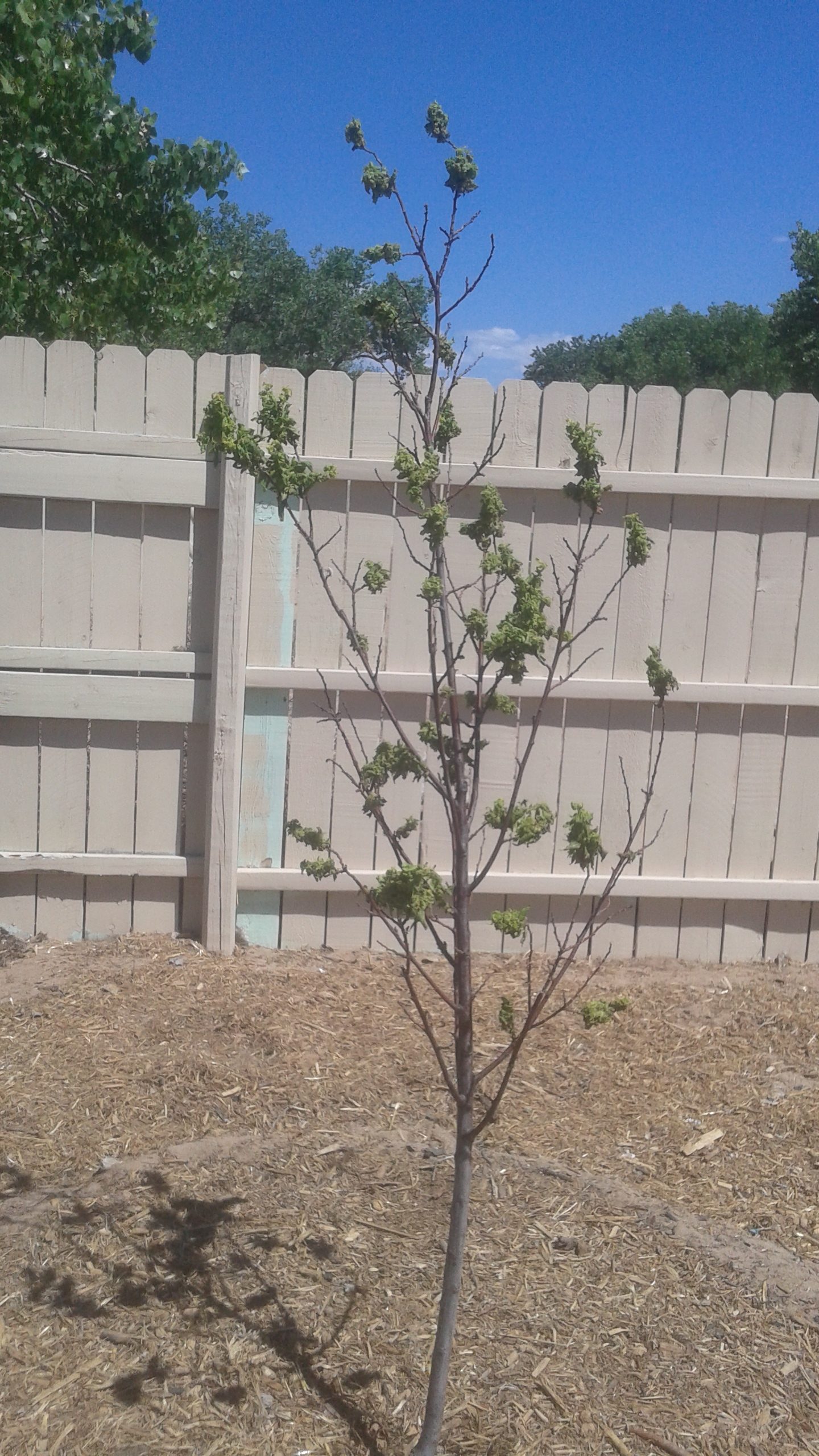 It was the middle of May this year and the leaves on my toddler Toca Plum tree were looking shriveled and intensely unhappy. Feverish prayers offered at the Google altar earned the following answer by one Robert Cox of the Colorado State University Cooperative Extension: “If you find that the leaves on your plum tree are curled up, some very tightly, it is most likely caused by the Plum Leafcurl Aphid” 1 He appeared to be a man of few words. Fortunately, at the end of his one paragraph of advice, he did offer a hope-inspiring hyperlink “Aphid Control on Trees”.   But it was soon revealed that it was actually code for “Abandon all hope, ye who enter here” because the very first sentence after clicking on it was “Not very much can be done to control aphids that affect trees…”. So much for that.

Aphids suck. Literally. They suck the juice out of the tender new leaves causing them to curl in. If enough leaves are damaged, a young tree can die.

I fretted and moped but the green bugs remained unmoved.

I started taking each leaf and scraping off the aphids with my thumb. After all, there were only 860 leaves. Despite appearing to decimate their ranks as evidenced by my green thumbs (finally!), it didn’t make a frog’s hair of a difference.

The arrival of two ladybugs sent my hopes spiraling causing me to clap my hands in childlike delight. Ladybug larvae are supposed to feast on aphids. However, despite their relentless courting over many days, no aphid-munching babies appeared.

“I just spray the aphids with a jet of water,” said Gailen, my Master Gardener mentor.

So I sprayed them with a jet of water, trying not to blow off the leaves along with the aphids.

Didn’t work. For the darned green bugs, safe inside the tightly curled leaves, it must have been like watching rainfall flowing down the eaves while sitting under the covered porch.

Then I sprayed with a solution of detergent and water. On a cloudy, windless day so that the leaves wouldn’t burn. Naturally, the aphids thrived and many leaves turned crispy brown and fell off. You’re supposed to use insecticidal soap instead of detergent, which I would have done if I hadn’t been lazy.

“Neem oil. Spray the leaves with Neem oil. But you have to get it on the underside, inside the curled leaf”, said Lynda, the Extension Agent, looking skeptical.

So on the first subsequent cloudy day, clad in my protective face mask, plastic goggles, and rubber gloves, I sprayed the leaves with Neem oil solution, massaging the underside of each leaf as I sprayed so that most of the Neem oil ran down my arm and into my underpants via my armpit.

Since the label said “Repeat after 7-14 days”, I repeated the treatment on the 7th day. This time, I stood on an A-frame ladder and foiled the Neem oil from running down my arm. And then, because I am programmed to think that more is better (I still have a few food issues because of this belief of my mother’s…), again on the next 7th day. More leaves turned crispy brown. 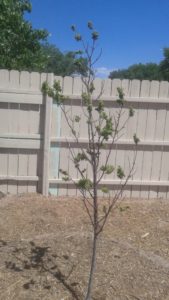 Examining the leaves became an obsession. First thing in the morning, last thing at night and all through the day at 15-minute intervals. Even though I wasn’t seeing as many aphids, new leaves would grow and start curling almost immediately. I took to chewing on my hair.

And that is when I was advised to talk to Elizabeth, the SCMG Arborist, who immediately put a stop to all the nonsense. She told me that I had been spraying Neem oil too often and should desist, that aphids get reduced gradually and only some weather event would kill them off completely, that I must not fertilize or over water because that would make the tree “luscious” and invite even more unwanted attention as lusciousness is wont to do, that I had done all I had to do and that now I should wait and watch and “…NOT LOOK AT THAT TREE AGAIN UNTIL FRIDAY” (this was a Monday… her upper case letters).

I did what she said till that Friday. But come Saturday and I was obsessing again, picking at the tree like a baboon in full grooming mode. By an act of colossal self-restraint, I did manage to refrain from spraying with anything more lethal than water.

And slowly, so very treely slowly, through the fraught months of June and July, the plum recovered. The curled leaves never uncurled, eventually turning brown and dropping off, but the new leaves stayed straight and healthy.

And I finally let out the breath that I’d been holding for all those weeks.

Submit your contributions to: “How Does Your Garden Grow?”
Jim Dodson | SCMG Newsletter Editor | semgnewsletter@gmail.com