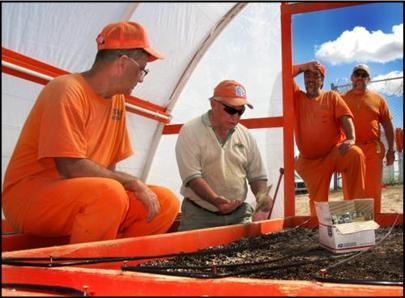 In the photo above, University Cooperative Extension Service agricultural agent Del Jimenez, center, shows New Mexico prison inmates how to plant a variety of winter greens. Jimenez taught 13 inmates at the Penitentiary of New Mexico in Santa Fe how to build hoop houses, where they will be able to grow vegetables for the Level II cafeteria’s menu. (NMSU photo by Jane Moorman)

by Jane Moorman, NMSU
SANTA FE – Thirteen men dressed in orange prison uniforms work under the hot September sun, building four economical greenhouse structures at the Penitentiary of New Mexico in Santa Fe. They are the inaugural team in the Corrections Industries program’s latest project, in which state inmates will grow vegetables to supplement the prisons’ cafeteria menu.

The College of Agricultural, Consumer and Environmental Sciences’ Cooperative Extension Service is providing technical advice and guidance in building the hoop houses.

The men were selected from 80 applicants to participate in the Roots of Success program. The Level II inmates have completed an environmental literacy course as part of the program.

“The corrections department approached NMSU in August to provide training to the inmates on construction of the hoop houses on the state penitentiary grounds in Santa Fe,” said Del Jimenez, Extension agricultural agent with NMSU’s Rural Agricultural Improvement and Public Affairs Project, who is conducting the training for the project that has the potential to spread to all of the state’s correctional facilities.

After receiving instruction while building of the first 32-foot-by-14-foot structure, the inmates were divided into groups to construct the three remaining hoop houses.

Once the structures were completed, nine 4-foot-by-10-foot raised planting beds were constructed for each house.

Then the dirty work began, as the inmates filled the planters with wheelbarrows full of dirt and organic material, installed a drip irrigation system in each house, and planted winter greens seeds.

“The first harvest was in early November and has continued weekly,” Jimenez said. “The fresh greens are supplementing the Level II unit’s cafeteria menu.”

“It’s a privilege to participate in this pilot program,” inmate Waylon Robinson said, echoing the sentiments of the other men in the program. “It gives us a chance to learn new things and to perfect some things that some of us knew already. It’s giving us a sense of pride.”

Inmate David Maez, who has been assigned to teach the environmental literacy curriculum, said he has seen “the men become a cohesive group with an enthusiastic positive attitude.”
Many of the men envision using the skills they are learning once they are released from prison.

“The hoop house extends the growing season that allows a grower to have fresh produce earlier and later in the season,” said inmate Charles Martinez. “My family has a ranch in the Mount Taylor area, where the growing season is short. I am hoping to build a greenhouse there once I am released in 20 months.”

Learning the vocational skill is just one aspect of the program. Secretary of Corrections Gregg Marcantel said the program is designed to also provide life skills training and a sense of accomplishing a task that is bigger than just the selfish behavior that brought most of these men to prison.

“We want to teach our inmates to become entrepreneurs who can provide for themselves and their families upon release,” Marcantel said. “It’s not enough to just teach someone a new skill; we have to change hearts, to make them feel part of a bigger purpose in life.

“These hoop houses do just that; these inmates have had to nurture these plants to provide food to feed other inmates. This program has really showed them that if you work hard, focus on your goals, and pay attention to detail, you can harvest meaningful and plentiful bounties.”

“What really attracted me to this program was the educational part,” said inmate Ronny Garcia. “I’m learning how to be productive with my life, instead of keep coming back to prison. This is teaching me a lot that I will be able to take home with me.”