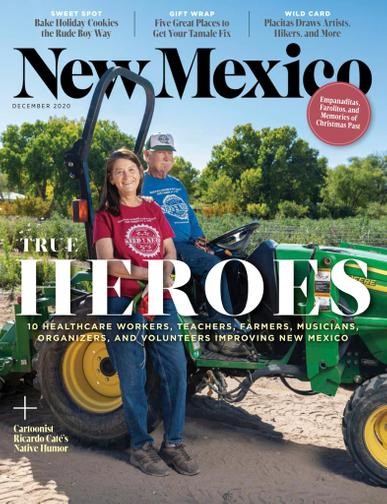 Many SEMG members were surprised and delighted to find our own Penny Davis, with her husband Sandy, on the cover of the December 2020 issue of the New Mexico Magazine.

We know Penny and Sandy as the founders of Seed2Need, the farm-to-food-bank program that attracts up to 500 volunteers each year from Master Gardeners, Scout troops, local businesses, church groups, members of the general public and students from Bosque School, Albuquerque Academy and Cibola High School.

Penny, a 2007 SEMG graduate, and Sandy started their operation in 2008, just as the economy collapsed and people lost jobs. They started growing vegetables in their neighbor’s empty horse corral with the commitment to donate the yield to Storehouse West in Rio Rancho. Penny admitted to being thrilled when a few years later, with more donated land and dedicated volunteers, the project produced 1,900 pounds of food for the food banks.

In 2010 the Sandoval Extension Master Gardeners agreed to sponsor Seed2Need. Since 2010 this project has donated more than 590,000 pounds of farm fresh fruits and to five local foodbanks and Roadrunner Food Bank.

In addition to planting, caring for, and harvesting the vegetable crops Seed2Need also coordinates volunteer teams for gleaning fruit from orchards all over the valley. A harvest of 10,000 pounds of apples from a single orchard is not uncommon. Seed2Need coordinates these large gleaning projects with Roadrunner Foodbank as they can consolidate and re-distribute to foodbanks all over the state

When asked what the best part of Seed2Need is, beyond providing tons of healthy food for people in Sandoval and Bernalillo county. Penny didn’t hesitate to respond, ”Getting to know so many nice people!” Penny and Sandy Davis are genuinely nice people as well.

Volunteer signup sheets and photos of the project can be found on Seed2Need Facebook page.  Volunteers are always welcome.

To find out more about volunteering for Seed2Need, as well as other programs, check out Sandoval Extension Master Gardener Projects.

From the first day I heard about Seed2Need, Margaret Mead’s famous quote has continued to repeat in my head.

“Never doubt that a small group of thoughtful committed individuals can change the world. In fact, it’s the only thing that ever has.”