Over The Garden Wall – Chimayó chile: a symbol of Southwest 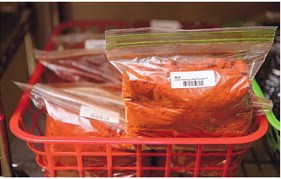 ‘It is synonymous with who we are as New Mexicans,’ says Gov. Lujan Grisham

Along the rugged foothills of the Sangre de Cristo mountains is a crescent-shaped valley,named Chimayó, after the nearby “T’si Mayo” hill of the Tewa tribe. It is an arts and farming community of 2,600 that straddles the line separating Rio Arriba and Santa Fe counties. Chimayó has become a symbol of the ancient culture of the Southwest, and of the reverence for cultivating the land.

Crescencio “Chencho” Ochoa, a farmer in Chimayó, devotes his time to working the New Mexico soil, growing what is perhaps New Mexico’s most iconic contribution to the world: the tantalizing flavors of red and green chile peppers.

The chile pepper, the most enduring fruit — not vegetable — of New Mexico land, likely made its way through Aztec trade routes into this land, where later-arriving conquistadors hastened its trade. Last year 2.4 billion pounds of it were sold around the world.

While New Mexico is the top chile-producing state in the nation, USDA figures show that chile is not the top product in the state’s $3.4 billion agricultural market. Chile is ranked a lowly sixth, below milk, cattle, pecans, hay and onions.

“When we grow it, when we harvest it, when we roast it, when we start to peel it, whole families will come together, much in the way you might recognize with tamale making with the holidays, where it’s a huge family production,” said Lujan Grisham. “That’s how New Mexico families embrace chile.”

New Mexico chile is as varied as the people in the state. Farmers and experts say that different soils, temperatures, elevations, watering and growing techniques all produce different flavor profiles for chile.

Although opinions abound on which chile region represents the true New Mexico flavor, most observers agree that the state’s chile identity is primarily defined by two chile-growing regions: the Chimayó fields in the north of the state, and the Hatch Valley in the south.

Authentic Chimayó chile is orange, smaller than standard chile peppers and noticeably wrinkled with a ridge near the stem, he said. It has a citrusy, smoky flavor and a little rush of heat — “just enough to give you a little bit of sweat on your brow,” he said — and with a savory aftertaste.

If someone wants the real thing, he recommended finding a farm connection, and schmoozing your way into the inner circle. The entire Chimayó Valley probably grows 30 to 40 acres of chile, and only about a third of that is grown to be put on the market, he said.

Ochoa is the largest chile grower in Chimayó, but he said the chile from this region represents a tiny drop in New Mexico’s chile market. This year, for example, he grew two acres of chile — down from his usual four or five acres — and sells it at nearby farmer’s markets.

Noel Trujillo, said he believes the Chimayó chile is a chile truer to the original plant grown throughout the centuries in New Mexico. Academics agree, citing a concept known as “landrace” — a term for plants that evolve into a specific chile “race” after 100 years of repeated seed selection and growth in a geographical area.

“The seed from landrace chiles was passed on from generation to generation, bringing forward genetic traits that allowed for adaptation to the unique growing conditions in northern New Mexico,” said Dr. Stephanie Walker, extension vegetable specialist at New Mexico State University, in an NMSU academic article titled “The Landrace Chiles of Northern New Mexico” in 2016. “‘Chimayó,’ the chile pepper landrace from the small village of Chimayó, is the most well known of the New Mexico landraces,” she says in the article.

Researchers found that northern New Mexico chile is not related to the Hatch Valley chile grown commercially in the southern part of the state. Chimayó’s closest relative is the chile grown in Mexico, adding credence to the legend that northern New Mexico chile was brought in by the ancient trade routes of MesoAmerica, including the Mexica — known popularly as Aztecs.

Chile in the north of New Mexico is also distinct because it is more directly tied to the original chile grown by the Indigenous and early Spanish settlers, chile experts say. They add that the evolution of chile in the north has been natural, different from the southern chile in Hatch that has undergone engineering to create a specific size, thickness and flavor profiles.

“While these New Mexico commercial cultivars are the main type grown in the southern part of the state, in northern New Mexico many Native American Pueblo and Hispanic communities have long grown ‘native chile,’ also known as New Mexico landraces,” Walker said in her article.

Gloria Trujillo agreed that the northern New Mexico is more natural, less altered and generally more unpredictable, sort of a free-range chile. “We don’t have mild, or medium, or hot. It is what it is,” she said. “If it happens to be hotter one year than the next, then that’s the way it is.”