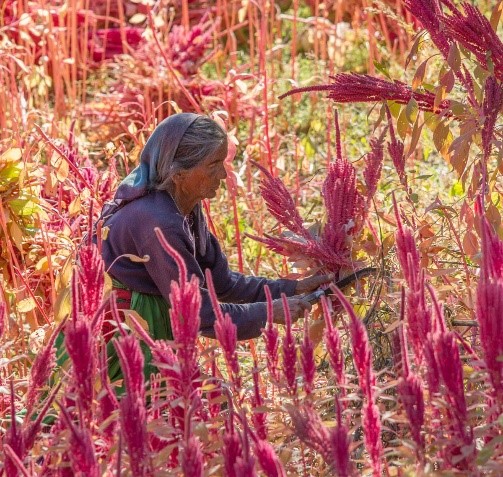 Note:  Occasionally gardening news pertinent to Sandoval County/New Mexico catches our attention and we want to share it. We excerpt and link to the original article for your convenience. As necessary, we will also provide the “other side”.

Just over 10 years ago, a small group of Indigenous Guatemalan farmers visited Beata Tsosie-Peña’s stucco home in northern New Mexico. In the arid heat, the visitors, mostly Maya Achì women from the forested Guatemalan town of Rabinal, showed Tsosie-Peña how to plant the offering they had brought with them: amaranth seeds.

Tsosie-Peña had begun studying permaculture and other Indigenous agricultural techniques. Today, she coordinates the environmental health and justice program at Tewa Women United, where she maintains a hillside public garden that’s home to the descendants of those first amaranth seeds she was given more than a decade ago.

They are now six-foot-tall perennials with flowering red plumes and chard-like leaves. But during that first visit in 2009, the plants were just pinhead-size seeds. Tsosie-Peña and her guests spent the day planting, winnowing, cooking and eating them – toasting the seeds in a skillet to be served over milk or mixed into honey – and talking about their shared histories: how colonization had separated them from their traditional foods and how they were reclaiming their relationship with the land.

Since the 1970’s amaranth has become a billion-dollar food – and cosmetic – product. Health conscious shoppers embracing ancient grains will find it in growing numbers of grocery stores in the US, or in snack bars across Mexico, and, increasingly, in Europe and the Asia Pacific. As a complete protein with all nine essential amino acids, amaranth is a highly nutritious source of manganese, magnesium, phosphorus, iron and antioxidants that may improve brain function and reduce inflammation.
Photo:  The Guardian.com”

This is a plant that could feed the world,” said Tsosie-Peña. For her it also has deep cultural value. She is part of growing networks of Indigenous women across North and Central America who have been sharing ancestral knowledge of how to grow and prepare amaranth. Seed exchanges, including those in New Mexico and California, are part of a larger movement to reclaim Indigenous food systems amid growing recognition of their sustainability and resilience in a time of climate crisis and industrialized agriculture.

Amaranth is an 8,000-year-old pseudocereal – not a grain, but a seed, like quinoa and buckwheat – indigenous to Mesoamerica, but also grown in China, India, south-east Asia, west Africa and the Caribbean. Before the Spanish arrived in the Americas, the Aztecs and Maya cultivated amaranth as an excellent source of proteins, but also for ceremonial purposes. When Spanish conquistadors arrived on the continent in the 16th century, they threatened to cut off the hands of anyone who grew the crop, fearing that the Indigenous Americans’ spiritual connection to plants and the land might undermine Christianity. Yet, farmers continued secretly growing amaranth, which sprouted up like a weed in their fields – even as far north as the modern-day United States. Although the Spanish outlawed amaranth when they arrived in Central America, Mexico and the south-western United States, Indigenous farmers preserved the seeds – which grew with remarkable resilience.

Tsosie-Peña first saw amaranth growing in her pueblo at her good friend Roxanne Swentzell’s house. The president of the Flowering Tree Permaculture Institute, Swentzell was teaching classes on how to garden in the high desert and also doing work around seed saving. Tsosie-Peña was interested in learning more, and in 2008 she received her Indigenous sustainable design certification from the Traditional Native American Farmers Association in Tesuque Pueblo. Montgomery was at the workshop and introduced the class to a handful of farmers from Qachuu Aloom. The next year, members of Qachuu Aloom made that trip to Santa Clara to plant amaranth in Tsosie-Peña’s garden.

Maria Aurelia Xitumul, a member of Qachuu Aloom since 2006 who has traveled on exchanges to California and New Mexico, echoes Tsosie-Peña. “The goal is to share experiences, not necessarily generate income, like capitalists. What we want is for the whole world to produce their own food,” she said in Spanish.
“For the seeds, distance doesn’t exist. Borders don’t exist.”

She also began noticing participants in different workshops she hosted – such as one with African refugees who’d settled in Albuquerque – connecting with the amaranth. It seemed like it had grown all over the world but come and gone with cycles of colonization.

A ‘superweed’
In 2010, the New York Times published an article about the looming threat of superweeds – weeds which have developed to be resistant to Roundup–including amaranth. When sprayed on a field, Roundup is designed to kill all plants except Monsanto’s genetically-engineered Roundup Ready crops. But somehow amaranth has survived – just like it did during the Spanish conquest.

“You can grow it in Hispaniola, you can grow it in northern New Mexico and the mountains of Guatemala,” says Montgomery. Xitumul was shocked when she visited the Hopi reservation in Arizona and saw how well it grew in the arid climate so different from her forested hometown.

A single amaranth plant produces hundreds of seeds – something that the farmers of Qachuu Aloom celebrated when the small handful of seeds Magaly Salazar sequestered away turned into hundred-pound bags of harvest the next season.

For many Indigenous farmers in Guatemala and the United States, growing amaranth has provided a degree of economic independence, but it has also offered a route to food sovereignty. More recently, during the pandemic, Xitumul said that people with their own gardens, especially in communities that had long lockdowns, felt more secure knowing they had control over their food supply. In northern New Mexico, many pueblos, including Tsosie-Peña’s, implemented strict quarantines. To support her neighbors in navigating a food desert, Tsosie-Peña distributed seeds at the outset of the pandemic.

OTHER SIDE OF THE STORY:  There are 75 species of Amaranth. Ten of them are native to the Americas. Per NMSU the Palmer Amaranth, the most common species locally is both invasive and toxic to grazing animals. The native species are short term perennials, and all drop thousands of seeds annually. It is also resistant to herbicides.

Amaranth, or Red Dye #2 is banned in the United States as a known carcinogen. Consumption of the plant itself has not been tied to any known ill effects in the 8000 years it’s been a mainstay of indigenous people’s diets.