Over The Garden Wall: The Inventor of the Sugar Snap Pea Has a Farm…

The Inventor of the Sugar Snap Pea Has a Farm…

Every spring, the sugar snap peas at Magic Seed Farm in Twin Falls, Idaho, burst from the dirt like an alarm clock, signaling the upcoming summer bounty. For owner Rod Lamborn, these snap peas are a living tribute to his father, Dr. Calvin Lamborn, the man who invented them. 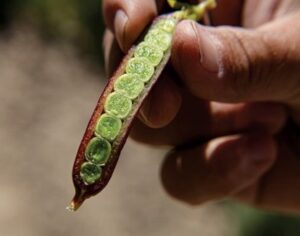 At Magic Seed farm, the immense variety of sugar snap peas are a living celebration of their late creator, Dr. Calvin Lamborn.

You’d be forgiven for thinking that sugar snap peas have occurred naturally forever. But this specific breed was invented by Dr. Lamborn in 1979, after years of trying to create a commercially viable snow pea with a smoother, straighter pod. Rod grew up here, witness to his father’s obsession and the excitement he felt whenever he successfully engineered a new variety.

“My dad was fascinated by these plants,” Rod remembers. His father developed hundreds of unique varieties of sugar snap peas throughout his life, documenting the genetic differences that resulted in an infinite array of colorful pods—yellow, magenta, purple with speckles—orchid-like flowers, and winding, edible tendrils. 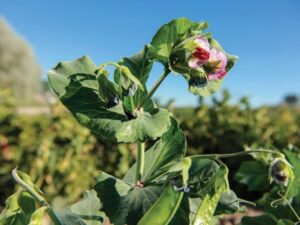 After a serendipitous meeting with chef Wylie Dufresne in the early 2000s, the Lamborns were connected with Sweet Berry Farms in upstate New York, where their snap peas were planted and ultimately distributed to top restaurants across the country, including Per Se, WD-50, and the French Laundry. Today, Magic Seed is home to more than 900 varieties of peas, and it sells more than a million pounds of seeds to commercial farms each year.

After Dr. Lamborn passed away in 2017, Rod took over the farm, studying the genetic variations of the peas and poring through his father’s journals, a process he says has given him a deeper glimpse into his dad’s passion. “I miss my father,” Rod says, “but I feel connected to him through continuing his work.

← Over The Garden Wall: Seed Detective Travels The World Tracking Down Lost Crops Does Gardening Count as Exercise? →