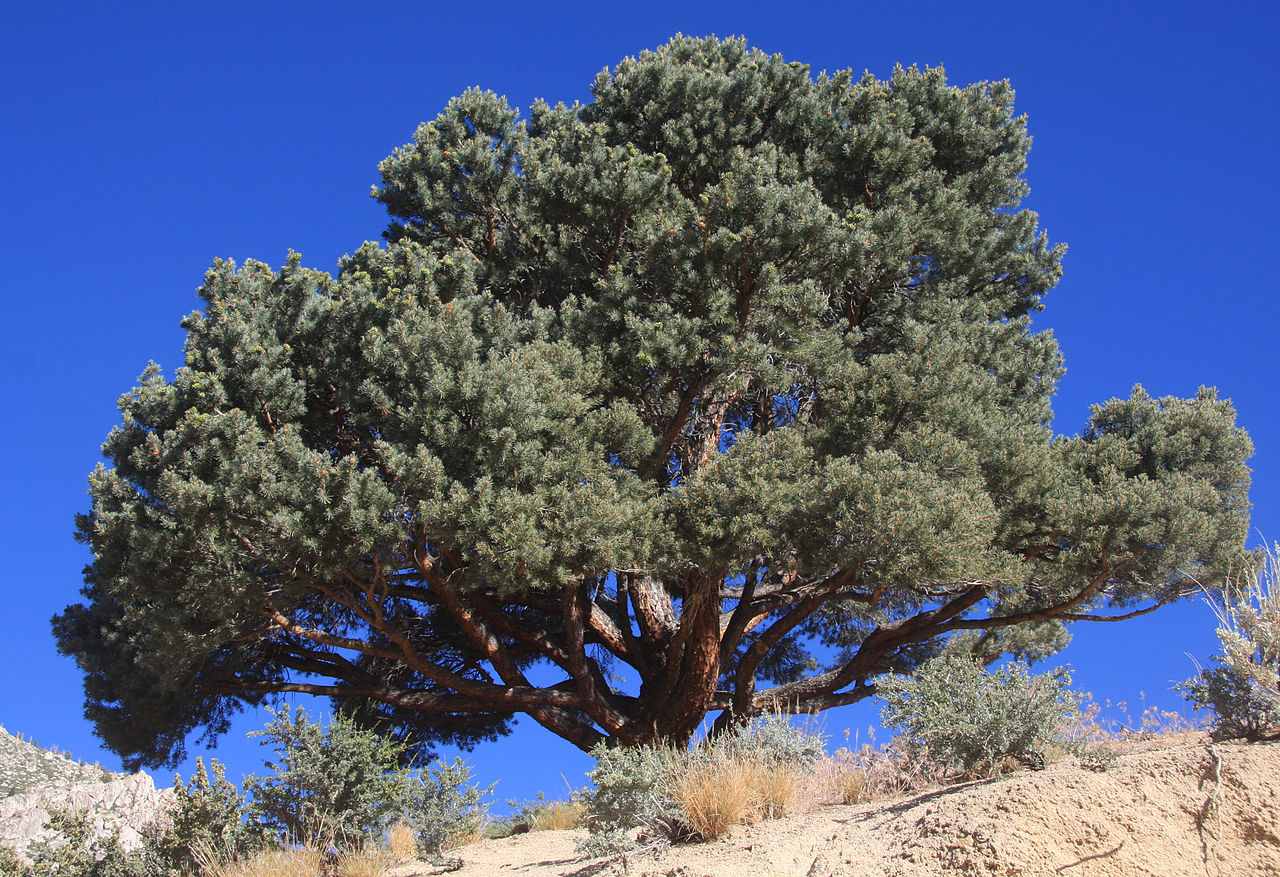 Sounds like I need to give my ‘Bark Beetle Talk.’ I just did that for the Little Bear Coalition in Ruidoso the first of this month. People in Ruidoso-Cloudcroft, Mountainair, the Sangre de Cristos in general, Sandias in general—wherever there are native pines—are seeing trees change color rather quickly—and then lose their needles. I strongly suspect bark beetles (BBs) have done their dirty work on all of your photographed pinyons. And the suspect would be Ips confusus….yep, gotta watch the ‘auto-correct’ function on the computer which will make it Ips confuses. Actually, that’s correct, too—they confuse the heck out of people.

I asked Jason yesterday (Plant Diagnostic Clinic) about any kind of pathogen associated with pine or pinyon pine that has been associated with either tree in recent years. I know there are needle blights, but you need humidity and heat for that to take off. There are probably undiagnosed root rots and etc. as well that complicate matters, but I’ll bet not too many people take correct root samples of their dead and dying trees to be able to confirm that. To date—no pathogens have been found on either tree that can do what BBs can.

So—back to Ips. We had an outbreak about 10 years ago that ran for—probably—5 years. They changed landscapes in several areas—not just tree density but also in tree composition. This is likely a repeat performance—-most likely to having so many drought-stricken beetle-susceptible trees. The current outbreak will last until it stops—or slows down to a dull roar again. Ips, Dendroctonus, Scolytus—and many other genera of tiny beetles in the Scolytinae—are all normal, natural creatures in our forests. In the ideal situations—which we haven’t had for years, if ever—bark beetles would kill trees distressed by lightning, landslides, wind throw, fire, etc. etc. etc. They would attack the weak trees that couldn’t defend themselves—kill them and maybe surrounding trees, too—but tree loss was limited. On the plus side, bark beetles thinned out over-populated areas, removed weak, possibly diseased or otherwise damaged trees, took out the aged trees, promoted species and age diversity in the stand—and probably created habitat for various animals that would have to forage elsewhere if it were not for bark beetles. Bark beetles and those that follow (assorted wood borers) also help recycle nutrients in the forest over the years. But when drought comes along—and persists—trees are under water stress in addition to all other stresses on them from their local environments.

So let’s jump to your question—when you visit a pinyon in trouble, how do tell if it has/had bark beetles? Shall we say, it likely won’t be a slam dunk initially—but there are tell-tale signs that the tree is already dead; it just doesn’t know it yet—but neither does the homeowner. As you drive toward this sick tree, look around the neighborhood/surroundings. Dead/dying pinyon trees in the area can certainly be an indicator of BB activity. If other trees have died of BBs, the one you’re going to see could be a victim, too.

1) ‘sudden’ change in foliage color. They start out green, then olive green—and after that, they can go quickly to orangy-brown or brown. Needles will come off in your hand. Color change can be limited (temporarily) to the top of the tree and then the whole thing turns color. Some trees will start off with scattered needles turning color—and then the whole thing goes. Bark beetles (BBs) kill host trees by girdling them (adult and larval galleries in the cambium) AND/OR by inoculation with blue stain fungi.

2) Pitch tubes—would only be produced if the tree has enough moisture In it to produce resin. Unlucky bark beetles try to chew through the bark and get a face-full of resin; that’s the pitch tube. Drought stress = no resin, no pitch tubes, last line of defense is kaput. You can miss seeing pitch tubes if they are higher than you can see or are in a part of the tree you can’t see. The rest of the tree may not be able to produce pitch tubes.

3) Reddish-brown ‘sawdust’ in the crotches of limbs or on the ground around the trunk. If the wind blows, the sprinkler system comes on, a heavy rain, mulch is applied, etc., you might not see this ‘feature.’ It’s reddish brown because the beetles are chewing through bark. Any wood fibers could come from BBs, too. This clue is easily lost with any ‘first aid’ applications to the tree, weathering, or just time—when no one’s paying attention.

4) Peeling bark. Definitely a bad sign. If you’re really lucky, the wood surface will be dry enough to see outlines of galleries. The inside of the bark may show galleries, too, if it’s dry enough. Sometimes BB sawdust packs the galleries, especially when the bark or wood is wet.

5) Shuffling sound under the bark. This could come from BB adults as they prepare to chew out of the bark and disperse. It might also come from sounds made by other wood borers—much larger than BBs and NOT the real problem here.

6) Tiny ‘shot holes’ in the exterior of the bark. Each hole might be the diameter of a pen point—like a BIC, e.g. If the bark is peeling off the tree and is reasonably dry—hold it up to the light and see if you can see through the little holes.

7) If the homeowner thinks the tree is dead, will be removed soon and would have no objections to some tree dissection, a saw and chisel or hatchet and chisel could be used to ‘open a window’ through the bark to look for bark beetle galleries—or bark beetle life stages. Chances are, the BBs will already be gone by this time.

8) When the tree is cut down, examine the cut end of the trunk and the stump for evidence of blue stain fungi. It may show up as a ring inside the bark or as a series of ‘triangles’ pointing toward the pith. The bark may still be tight on the trunk even then.

I think you’re getting the idea that clipping a brown-needled twig off a tree and submitting it for diagnosis—hey, we know it’s dead—but a twig with dead needles won’t tell why. Ips confusus—in pinyon—will be leaving evidence in the trunk. If you’re going to ship anything to the lab for confirmation, send us a ‘round’ off the trunk. A reasonable amount would be a round a couple of inches thick. It’s really a good specimen if it shows blue stain fungus. That makes diagnosis very easy to confirm. Reread the above if you can’t tell us why—two reasons and how are they related.

Whether it’s when you arrive or give you diagnosis, there will be a howl of pain from the homeowner. Let the ‘yeah-buts’ begin……

1) When it comes to home landscapes, homeowners just don’t ‘get’ irrigation. A ring around the trunk won’t take care of a tree—and neither will a single drip-line passing by the trunk; neither have probably changed since the Reagan administration. Homeowners will loudly proclaim the tree is well watered—using various descriptions of ‘well’ but dry soil beyond the drip-line is not a good sign. BBs can fix that for you.

2) While watering has been promoted as a way of bolstering tree defenses, even the best irrigation plan will not stop bark beetles in ‘outbreak mode;’ they will overwhelm the tree and kill it, resin or no resin—just like the lions of Africa will keep piling on to the Cape Buffalo until they bring it down and that’s that.

3) If you haven’t seriously upgraded your tree watering procedures in the last decade or so, suddenly watering more or with greater volume now will not compensate for the lack of serious effort in the previous decade or two.

4) Plastic under mulch can deny a tree water as well as asphyxiate the roots. BBs will respond.

5) Building a house, garage, shed, patio or sidewalk on the roots of an existing tree will also stress an established tree. BBs will find the tree and kill it.

6) Changing the grade on an established tree can kill it or weaken it to the point of attracting bark beetles. BBs say ‘yum.’

7) Periodic/regular fertilization or ‘stake’-type fertilization may stress a drought-stressed tree even more. BBs say ‘tree is a little salty, but dry.’

Well, how did the BBs get to my tree, anyway? We’re getting closer to understanding……

2) No, you won’t see them coming—either singly or in hordes. Each cylindrical little beetle is less than ¼” long and dark brown or blackish—not easy to detect on pinyon bark, especially when it’s shaded by limbs and needles.

3) How far do BBs fly? As far as is necessary to find a potential host tree. Once there, the BB finds a potential mate already inside the tree.

4) Which life stage attacks my tree? Adults fly from their ‘parental tree’ to bore into your tree. Only part of the adult BBs life occurs outside of a host tree. Eggs, larvae, and pupae are found (with difficulty) inside the tree—in the live bark of the tree.

But I LOVE my pinyon. I see that there are signs of bark beetles, but can I save it—and if so, HOW?

1) Realize that a BB-infested tree could very well be living on borrowed time. BBs are inside the bark where you cannot kill them with any topical, systemic or injectable treatment. BBs have already inoculated the tree with blue stain fungi—for which there is no pesticide treatment.

2) Applying more water won’t make the tree take it up. The vascular system is cut by the BBs.

4) I can spray insecticides! Fine, but BBs are under the protective bark and can’t be reached.

5) I can load the soil with systemic insecticide and water. But the vascular system is cut by BBs.

6) I can have injectibles or tablets drilled into the tree. The vascular system is still cut by BBs. Any of these products must be registered by USEPA and by NMDA. Read labels carefully to answer this question.

7) I can apply mycorrhzae to the tree or the soil. This would do nothing for the tree. Mycorrhizae are microbes that would infiltrate the roots of certain living plants, a symbiotic association that can provide nutrients to a host tree—if it’s healthy.

8) I’m organic so I need an organic control. Alas, no organic controls will protect or save a tree, even a healthy one, from BBs. Read labels and review the life cycle of BBs to determine why that is so.

9) Why can’t I get results from having the tree treated with Bifen XTS, Sevin SL or Astro? Read those labels and find out why.

If a tree is suspected of having BBs, keeping it will allow beetles to complete their development, leave that tree and infest others. The big surprise here is that by the time you figure out your unprotected tree has BBs, they have likely already completed development, left that tree and infested others. Sanitation is an organic practice aimed at prevention of infestation, if that is of any help.

Pinyons that you want to keep—give serious consideration to having each meaningful tree treated (professionally is better—and the only way if Astro is used; it’s a Restricted Use Product) according to label directions for the life of that tree. If you have an acreage of pinyon trees, realize that you could lose all of them; you won’t be able to afford treatment for all of them. Removing the dying trees might improve the property’s appearance and preserve more of the property’s value than letting everything die and not doing anything.

Sooo—-Ips can be tough to diagnose when all the property owner wants is a ‘look see.’ When Ips are in the neighborhood, it’s likely that other pinyon will be infested sooner or later. ‘Doubters’ will learn about BBs from the BBs themselves.
Dr. Carol Sutherland, Extension Entomologist, NMSU & State Entomologist, NM Dept. Agriculture