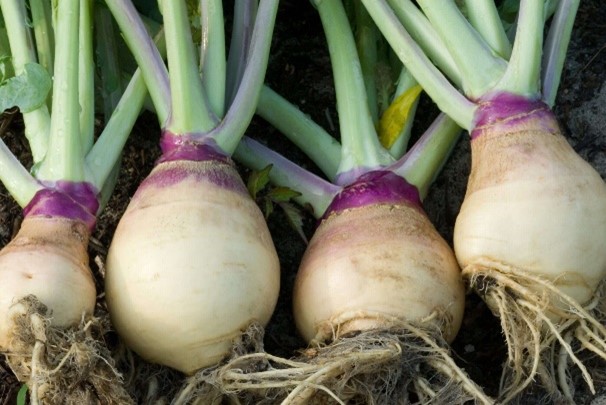 When was the last time you purchased a rutabaga? For me, it was last week after running across more than one food blog or article extolling this inexpensive, flavorful, low calorie, and easy to prepare winter vegetable, making me wonder if the rutabaga is the “new” kelp, Swiss chard, daikon radish, water cress, broccoli leaves, collard greens, celery root, dandelions, all of which were purportedly trending in 2021.

I think we can all agree that the first trendy hipster vegetable was kale, which became fashionable about 10 years ago, when we started blending it into our smoothies, turning it into chips (guilty), and even rocking it on t-shirts (not guilty). However, around 2015, some food writers were declaring kale dead in blogs titled “The Rise and Fall of Kale,” and “What Will Be the Next Hipster Vegetable.” Explaining how kale became the hipster vegetable that drew us all in, Christine Garofalo wrote in 2015 for Paste Magazine that “[a] number of external factors surely contributed to making kale so cool — from marketing execs pushing “Eat More Kale” shirts to the trendy, suspender-wearing chefs at the Lower East Side restaurant Fat Radish who came up with the Kale Caesar — but at the end of the day, I venture to say that all these fancy marketing schemes could not have had the same impact had kale not also packed a lot of nutrition into a small, relatively cheap, package.” Ms. Garofalo goes on to write, “There is no shortage of could-be viral veggies out there,” and proceeded to list six criteria, keeping in mind some of the things that made kale so cool, that could make a vegetable go viral from farm to table: cost, nutritional density, availability, familiarity, cultural cachet, and juicing potential.

Rutabaga: Trending or Underrated? Though rutabaga doesn’t meet a few of Ms. Garofalo’s metrics, according to Erik Mathes, (Fall Food Trend: Rustic Rutabaga Gets Its Modern Moment | Vitamix), the rutabaga was trending with savvy chefs in the fall of 2016. (I have to say I missed it.) Or maybe it’s coming back because it never really took off? What recently brought the rutabaga to my attention was a January WSJ article on British food stylist and writer Anna Jones and her new cookbook “One: Pot, Pan, Planet” (Knopf), published in the U.S. Jan. 4, which offers her new collection of plant-based recipes—all of which can be made using only a pot or two—and serves as a guide to environmentally sustainable eating, shopping, and cooking. In the WSJ interview, Ms. Jones pronounces the rutabaga as the most underrated ingredient, crooning “It’s a really, really useful, really cheap vegetable. I think it should be up there with the squashes of the world. It’s got that savory-sweet balance. It’s great cut into strips for oven chips. I also make a version of a carbonara with it. It goes crispy and craggy—obviously not the same as pancetta, but to me, it works in well. Smoked salt gives it a bit of smoky flavor.” Ms. Jones’ vegan Smoky Rutabaga Carbonara is this month’s Garden2Table featured recipe.

This rustic root vegetable is a staple in Northern European cuisine and known by several names around the world. It is referred to as “swede” in England, “turnip” in Scotland, and “rutabaga” in America. Originating sometime in the 17th century, it’s a hybrid between a turnip and a wild cabbage and looks like a giant, ugly turnip. While rutabagas and turnips look somewhat similar, they’re not identical. Rutabagas are large, more yellowish, and only grow in cool climates. Meanwhile, turnips are small, usually have a reddish tinge, and grow in a variety of climates. Both vegetables have a slightly bitter flavor that’s similar to cabbage, but rutabagas are sweeter and milder when eaten raw, and when cooked, rutabagas become savorer, yet still sweet—almost like a rich potato. Everything you would ever want to know about the rutabaga can be found here: Rutabaga – Wikipedia.

At only sixty-six calories per cup, rutabagas make a great, low-cal snack or side, are high in vitamin C and fiber, make a great alternative to potatoes in a low-carb diet. One cup of boiled and cubed rutabaga contains twelve grams of carbohydrates, while the same amount of boiled and cubed potatoes contains 31 grams of carbohydrates. For more nutritional information, please visit: 7 Health and Nutrition Benefits of Rutabagas (healthline.com)

In most parts of the Northern hemisphere, rutabagas are in season October through March and are best enjoyed in the dead of winter. When researching the rutabaga, a lot of articles I read declared that the rutabaga is very easy to cultivate. But, according to one of my favorite gardening blogs, The Gardening Dad, rutabagas are not so easy to grow here in New Mexico because they are not able to survive frost or cold weather under 50⁰F. If you plant them outside too early in the spring they will die; if you plant them too late, your rutabaga won’t produce a harvest before the first frost arrives in the fall. However, if you are interested in giving it a try, and I suggest you should, you can check out informative growing tips here: Here is the BEST Time to Plant Rutabaga in New Mexico (2022) – The Gardening Dad.

Rutabaga has the sweetness of a carrot, the tartness of a radish and the texture of a turnip. Eaten raw, the flavor is mild, earthy, and bittersweet. When roasted its flesh goes a deeper orange and it becomes sweeter, a bit like butternut squash, with a nutty, buttery flavor. The best part about rutabaga is that you can prepare it just like a potato, which translates to more ways than you can count, and it’s much lower in carbohydrates. (I did read some people are born with a gene that makes rutabaga taste highly bitter.) Their skin is typically waxed and can range from tan to deep violet, and the inner flesh is a mellow gold. Store rutabagas in your fridge in an unsealed plastic bag, and wash and peel the skin thoroughly before cooking them. Though the rutabaga is used all over Scandinavia in many side dishes (mashed or roasted) and as a component of traditional holiday feasts, they aren’t as popular here in the states. However, you can find a slew of rutabaga recipes on the internet. Here are just a few.

← Beyond the Garden Wall February 2022 – Garden to Table Recipe →