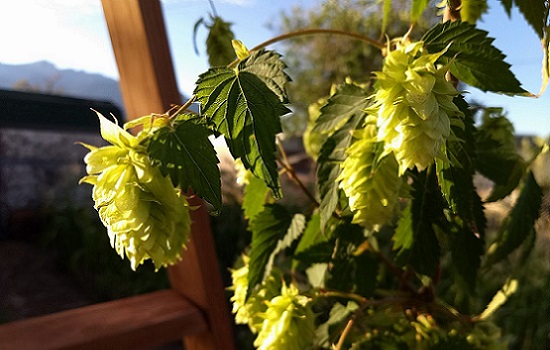 CAUTION: — Growing Neomexicanus Wild Hop Can be addictive — and it is just about as practical as a mid-engine sports car.

I have learned enough to know better over the past eight months, but I am more motivated now than ever to grow more next year. No 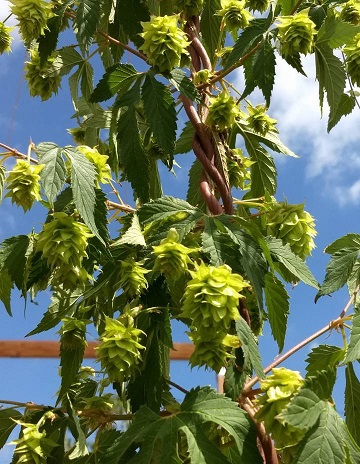 t so much for my successes, but because of my experiences nurturing this amazing, fast-growing vertical giant that lights up the morning with bright fragrant cones that pack a delightful pungent bouquet.

It was last October that I hiked into the Jemez Mountains with my teenage son and older daughter to discover and dig up wild Neomexicanus rhizomes to bring home and plant in our backyard garden in Bernalillo, (that we lovingly call, “Hop 313.”)

In the warm winter months of January and February, I designed and built ten vertical structures to become the foundation for my experimental vertical garden. By March 1st the structures were in place and my son and I divided the wild rhizomes into about 60 separate shoots and crowns.

By May, the first young ho

p sprouts were beginning to spring up, although only 25% of the plantings produced hop shoots. Of those, a few were very slow growing, some were early to rise and produced small cones by June. About a dozen of the 60 planted became productive and capable of reaching the ten-foot limit of my structures, and about six of those became beautiful, vigorous producers by September, resulting in large healthy leaves and cones with multiple branching that is characteristic of Neomexicanus.

My greatest nemesis and the most time-consuming annoyance was discovering that my field becomes a bindweed factory when water is applied and it will attack anything and everything in its path. The hours I spent bending down to pluck bindweed became my Zen workout and while I hated it, mitigating the weeds to protect my plants was worth it, and spending time outside and working the garden became my therapy, both physical and mental. Yet, the more I plucked, the faster it grew. Bindweed is nationally recognized as one of the most noxious weeds in the US. It is virtually indestructible because, as a rhizome it can live up to twenty-five feet deep and become active upon watering the ground above it. The only way to eradicate it is to dig up the roots. Therefore, manually removing it periodically is the only solution to protecting your garden from bindweed suffocation.

Growing hop is a multi-year commitment. The first season, you just let it grow and establish its roots, which over time can reach up to twenty-five feet deep, reaching underground water resources. By the third year, it becomes important to dig up the mature rhizome “crowns” and divide the shoots for replanting or resale. Left alone over time the hop can become highly unmanageable, much like bind¬weed in fact. Growing hop is labor intensive. Even picking is tedious unless mechanized.

I began harvesting in early-September. You can tell 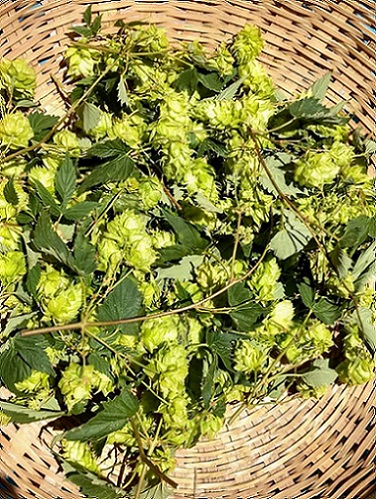 when it is time to pick hop by feeling the cones with your fingers. If the outside petals feel and sound dry as you touch them, it is time to pick. If they feel soft and pliable, they are still ripening. My first batch yielded a half-gallon mason jar, once dried and cured. Fresh dried hops hold the highest values of aromatic properties and is ideal for home brewers, who typically produce about five gallons of beer at a time. A commercial brewer would need me to produce about a thousand half-gallon jars to create a viable local commercial product. I would need more grow space to supply a local com 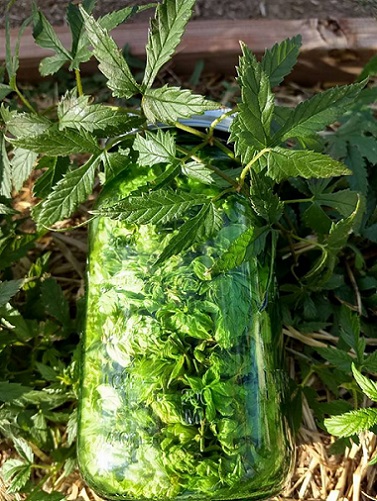 mercial brewer. For now, we hope to find a following of local home brewers at the local growers markets who will enjoy our fresh dried Neomexicanus.

Just recently, Hop 313 received notice to vacate because the property (which we rented) had been sold. At first, we were devastated. Our labor of love seemed suddenly over. Unless we could find another suitable location and rebuild. Fortunately, within a couple of weeks we found a new home for Hop 313. We are relocating only a mile North, where our new grow space is fourfold larger and we have a functioning well pump for irrigation. And . . . there is NO BINDWEED!

Unquestionably this is an unexpected and abiding blessing for Hop 313. Dismantling the structures and replanting the first season over again is a setback — but eliminating the bindweed and expanding our grow space is significant. There is joy in growing hop and watching it climb. It is worth the extraordinary effort. Consider growing some Neomexicanus in your garden next year. But, be warned — you could become addicted.