Plant of the Month – Tulips 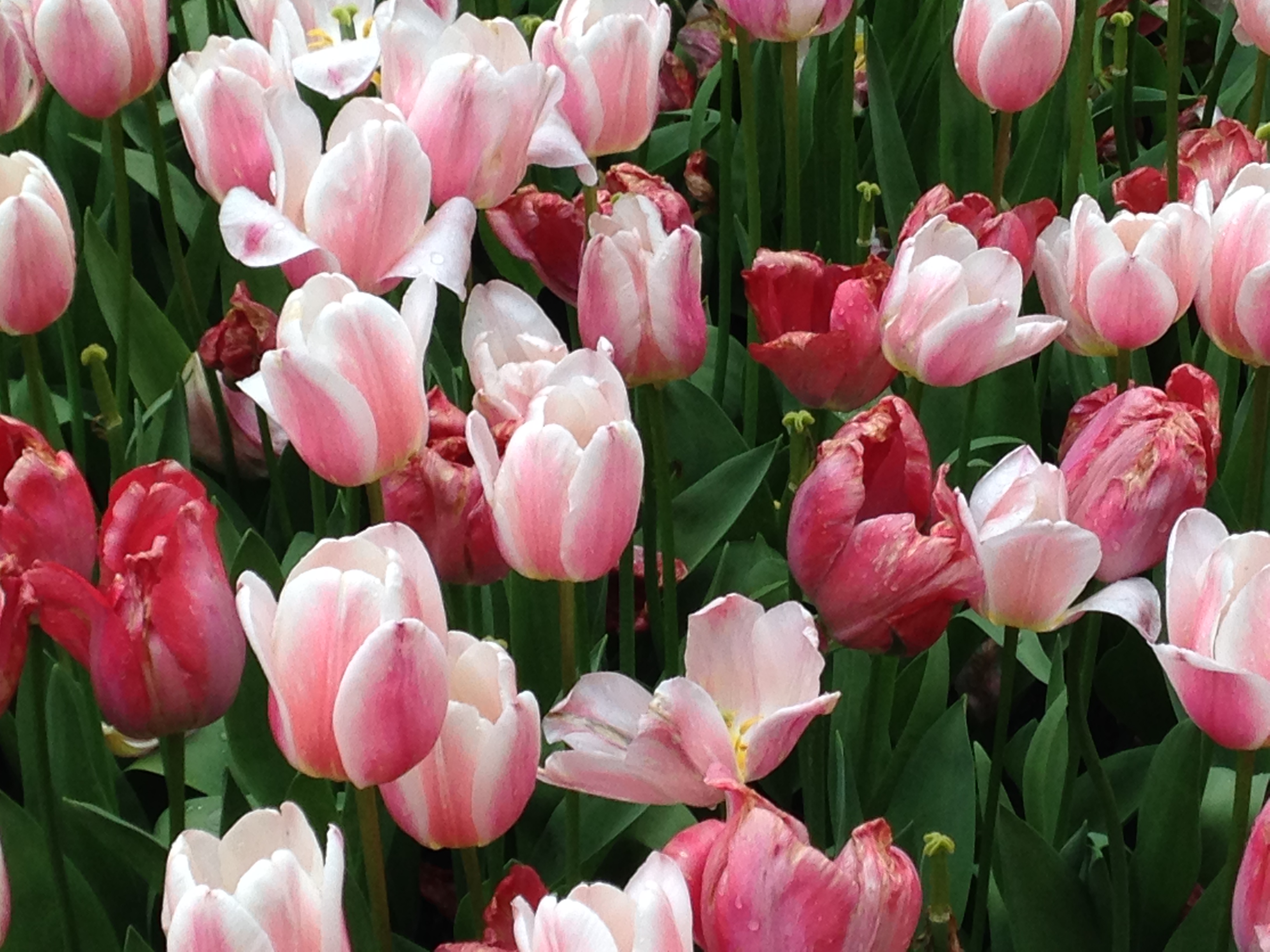 History
The word Tulip is thought to be a corruption of the Turkish word ‘tulbend’ for turban or Persian thoulyban alluding to the shape of the just-opening perianth. The Tulip was introduced to Europe by a famous Austrian biologist Carolus Clusius, who brought it to Europe sometime in the late 1500s. The flower was considered as symbol of the Ottoman Empire by the Europeans. A European gardener of the time thought the tulip symbolized imagination, dreaminess, the perfect lover and a declaration of love.

Tulip plants belong to the genus Tulipa, in the lily family, Liliaceae. Tulips bloom on bulbous plants, with large, showy flowers with six petals. There are around 100-150 species of Tulips, which actually came from the Central Asia into Siberia and China where they grow wild. Turkish growers first cultivated tulips as early as 1,000 AD and currently there are now over 3500 different listed varieties. The common garden tulip (Tulipa gesneriana Linnaeus) and a number of other species (T. bakeri Hall, T. clusiana de Candolle, T. fosteriana Hoog ex W. Irving, T. kaufmanniana Regel, T. tarda Stapf), as well as a vast array of complex hybrid cultivars, are commonly planted for their spring flowers.

Viral infection of tulips results in odd, yet often attractive, colored streaks in the flowers. In the early 1600s these variants, called “broken” tulips, became prized in the Netherlands, widely sought, and worth considerable money. The ensuing “tulipomania” lead to widespread trading, speculation and one bulb was worth as much as a canal house, and then, as with most similar fads, a sudden market collapse in 1637.

Today billions of tulips are cultivated annually, a majority of which are grown and exported from the Netherlands. Tulips are the third most popular flower in the world following the rose and chrysanthemums. After roses, Tulips are the second most popular flower to send for Valentine’s Day. The blooms which are usually one per stem, but can be up to four per stem, continue to grow after they are cut and continue to bloom for 3-7 days in the vase.  While some of these species or cultivars may persist for a short time, they rarely become truly naturalized in the flora. Taxonomic difficulties abound in Tulipa due to their long-established cultivation, hybridization, and selection.

Growing tulips
Tulips are actually very easy to grow. Many people design an artistic, colorful layout for the Tulip blooms. Although Tulips are sun-loving, the intensity of the NM afternoon sun may cause them to suffer heat stress and should be a consideration when placing the bulbs. It is advisable to select only the finest quality bulbs, generally, the larger the bulb, the larger the bloom. After selecting the site for your Tulips, which should be well worked so as not to be compacted and free from grass and weed roots as well as large rocks, incorporate plenty of organic material and fertilizer into the selected area. Special bulb formulas, usually with high potassium and phosphorus ratios compared to nitrogen, and bone meal work the best. Ideally, the soil should have a slightly acid pH of 6 to 7. Tulips will bloom in almost any well draining soil since soggy soils tend to encourage bulb rot and/or poor flower display. With proper soil conditions, the bulbs should flower successfully each year. They should be planted per the directions from the supplier for spacing and depth. If no directions are included, plant the bulbs 6-8” apart and at a depth twice the diameter of the bulb.
Tulips are vivacious perennials and after the Tulip blooms, the plant continues to grow while slowly losing the outer parts but conserving the underground stems which are bulbs. It is during this post bloom period that the plant stores energy in the bulb for next year’s bloom.  Two to three weeks after the blooms have faded; the bulbs may be lifted and stored in a cold, dry place to be planted again in late autumn.

Tulips do require a period of cold while they are dormant and resting between bloom seasons. Tulip bulbs use the winter cold as a stimulation device. After cold weather, a tulip bulb slowly activates its flowering process for a spring bloom.

Finally, it is good practice to move the bulbs to a different location after approximately three years to keep them vigorous and promoting quality blooms if you want to use the same variety each year for many years. Since bulbs are relatively inexpensive and  readily available in so many colors, some people actually treat them like annuals and change the display of their beds each year by purchasing new bulbs each season.