Pollination of Plants in the Gourd Family (Cucumbers, Squashes, Melons, and MORE!) 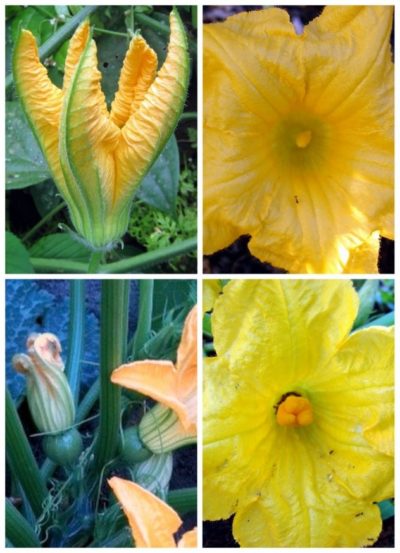 Question: I would love to be able to grow both zucchini and watermelon this year, but I am hesitant because of problems with cross-pollination in the past. Any tips?

Answer: First of all, for readers who don’t already know about NMSU’s Seed to Supper program through ICAN (Ideas for Cooking & Nutrition), this is a free, online, self-paced beginning gardening course that was first developed by the Oregon State University Extension Service and modified by our own NMSU Food Systems Specialist Sally Cassady to be web-based and New Mexico-oriented (https://ican.nmsu.edu/seedtosupper.html).

Plants in the cucurbit (gourd) family include melons, pumpkins, squash, and cucumbers. Each of those different cucurbits includes plants of different species and genera (plural of genus). Remember, the scientific names of plants consist of two parts: the genus and the species. So musk melon’s scientific or botanical name is Cucumis melo, with “Cucumis” as the genus and “melo” as the species. Cucumber is Cucumis sativus, so even though musk melons and cucumbers are in the same genus (Cucumis), they are not the same species and won’t be likely to cross-pollinate. Even if they did cross-pollinate, the evidence would not be visible in this year’s crop. If you saved seed from cross-pollinated fruit and grew it next year, you might get something cool and yummy, although it’s more likely to be undesirable. Pumpkins with green bumps could be the result of seeds that were saved from normal pumpkins crossed with green-warted gourds.

It’s not just that plants from different species aren’t likely to cross-pollinate based on their genetics. Dr. Amanda Skidmore, NMSU Extension Integrated Pest Management (IPM) Specialist for Urban and Small Farms, explains that our pollinators are picky too: “Interestingly, different pollinators will visit each plant because of the flower shape and inflorescence. For example, squash bees will visit zucchini, but not watermelon.” Dr. Skidmore encourages gardeners to “take some time to watch and see what different pollinators are visiting the two plants. There will be some overlap (honey bees, bumble bees), but some cool differences too.”

Smith also offers tips on how to pollinate your cucurbit flowers yourself: “Each morning, collect pollen from the stamens in the center of the male flowers and then transfer that pollen to the stigma in the center of the female flowers. Use a small, soft-bristled paintbrush to do this. If you are successful, you should see small fruit forming within a few days. Leave some female flowers unpollinated (by you), so you can watch for the return of the natural pollinators to relieve you of the early morning effort of pollination.”

A few years ago, I wasn’t convinced that I’d be able to tell the difference between male and female flowers on a squash plant. That is, until I looked closer. Both flower types are huge and bright orange-yellow, but if you look just behind the flowers, you’ll know when you find a female versus a male because there’s a swollen fruit structure developing at the base of female flowers. In some cucurbits, that baby fruit will be more rounded, and in others more like a small pickle.