I live in Glenwood Hills, with a big backyard, which has many mature trees. This yard also has caliche, so the tree roots spread everywhere! I have made a few attempts to make raised beds and wanted to share this journey and describe my latest, and so far successful method.

My first attempt was to dig up a garden space, in the previous owner’s space, just off the patio. This space is surrounded by pavers, is situated near water and has easy access. This was a quick failure, as the tree roots immediately invaded, and overwhelmed my new plantings. To give you an idea of the extent of the invasion, at the beginning of the new planting year I tried to dig up the soil for a new planting. It was impossible to dig, and I ended up literally cutting the soil into one foot chunks with a reciprocating saw, and then shaking the soil out and discard the root squares. There was more root than dirt!

My second attempt was to line the garden space with two layers of landscape cloth. This proved to be no match for the roots, which quickly overwhelmed the cloth by going over, around and through it. The roots were slowed somewhat, but it was not a sufficient long-term plan.

My third attempt was with straw bales. As seen in the chart below, the benefits of straw bales were compelling and convinced me to try. This was partially successful since it physically separated my plants from the lurking roots. I purchased the bales from Millers Feed and Supply on 4th St NW. Since I have a Toyota Sequoia and not a pickup truck it took two trips to get enough bales transported. The main problem was that the bales are very difficult to keep moist. Bales are a popular method on the internet, but I think it is more successful in environments that are more humid. It might be more successful with some type of catchment system for the water, since without it, the water quickly drains through into the ground underneath. I couldn’t think of any easy, affordable way to do that. In retrospect, it might be possible to put the bales into my final method-water troughs. Picture 1 below shows the straw bales in my garden. 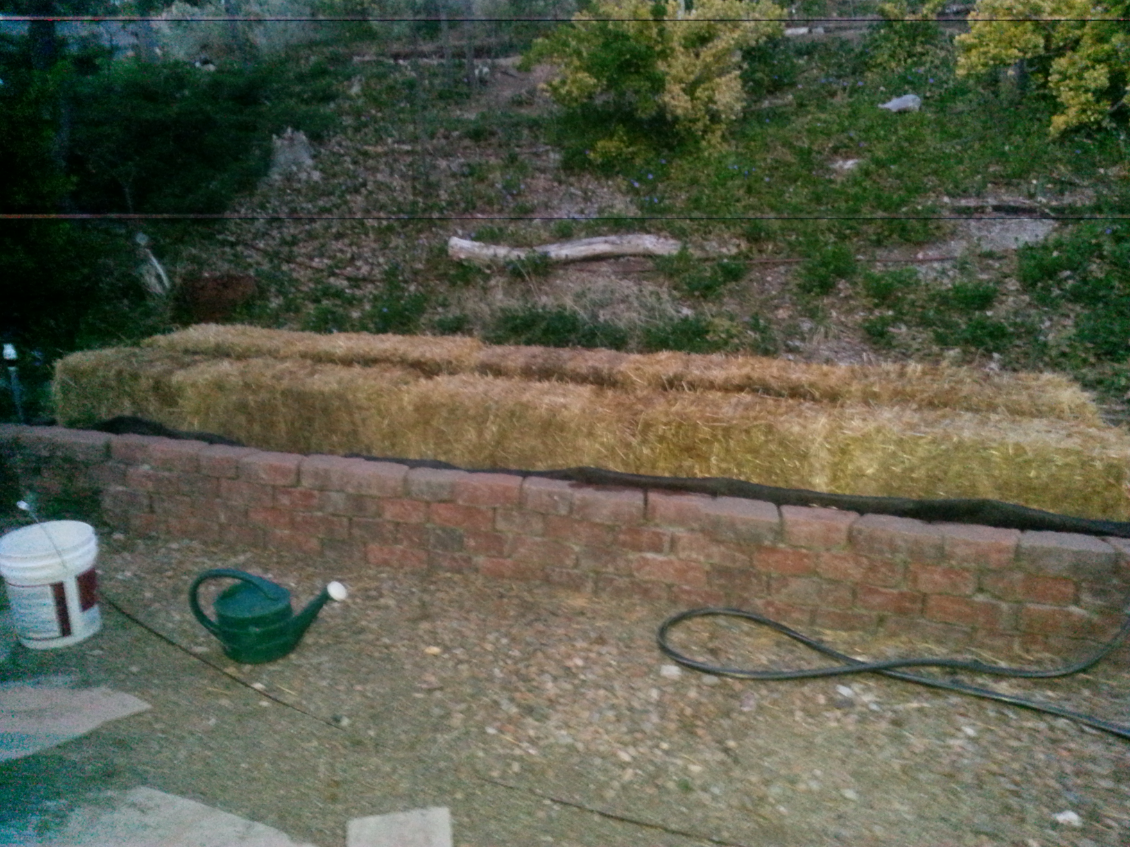 Picture two below gives the appearance of a reasonable garden, and shows the drip irrigation installed on the bales. However, the garden faded as the summer progressed and the temperature got much hotter. It just seemed impossible to keep the bales moist enough for the plants to thrive in this arid environment. 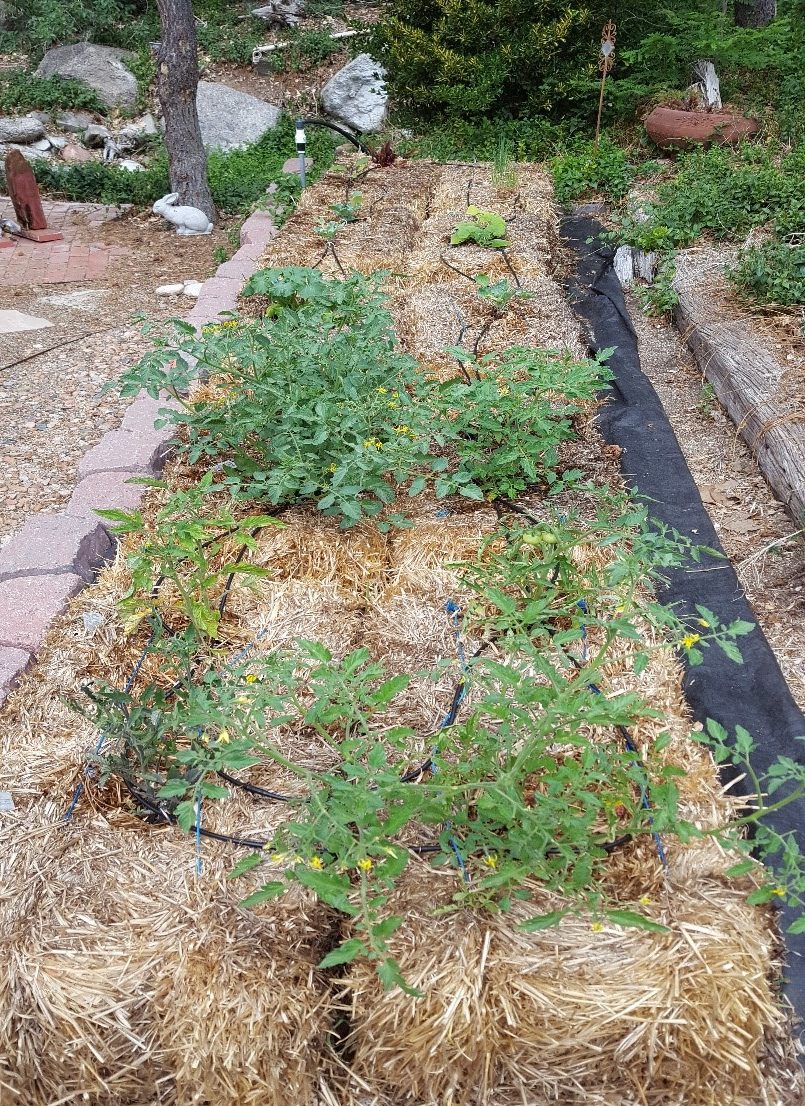 As you can see in the chart below, it makes no mention of the difficulty of dry climates. 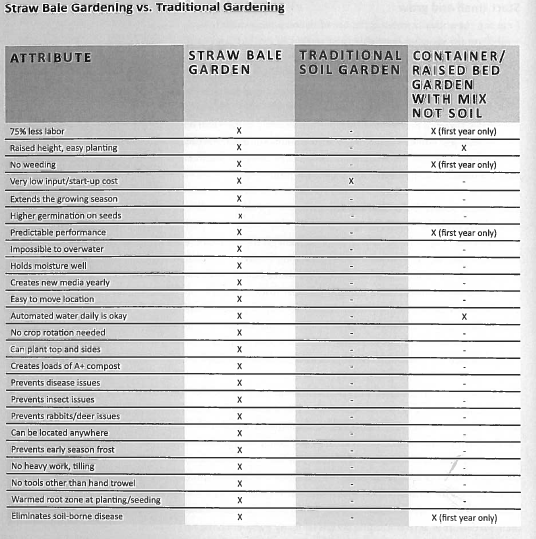 A secondary project involving straw bales was a worm farm. This actually worked better since it was smaller and partially enclosed. This square of bales was 1.5 bales on each side and two bales high as the picture below shows. This structure was much better at retaining water since the entire middle section was filled with soil and worms. I couldn’t seem to keep up with the constant feeding of the worms and so the farm ended, but the area did produce great crops of tomatoes planted in the bales and to this day has left an amazingly fertile area between two peach trees as seen in the picture 3 below. This location also received more shade than my garden area. Newspaper covered the middle of the worm farm to provide food for the worms and retain moisture. This picture also shows how over time it can be difficult to maintain form as the bales disintegrate.

My most recent attempt at raised beds is the wicking beds using water troughs. I gleaned the water trough idea from my involvement in the Sandoval County Master Gardener Program. The wicking bed is also found on the internet in many places. This combination of ideas appears to solve both the separation from roots and the problem of our arid environment. I found water troughs at Tractor Supply in two sizes: 8 ft. L by 3 ft. W and 2 ft. H, and a smaller 4 ft. L, 2 ft. W and 2 ft. H. I opted for the smaller one since it would be nearly impossible to handle the larger one alone. These cost $99 at the time and four of them would fit into my garden area, which is fenced to keep my mischievous dogs out. I decided it would be better to make them look nicer than the bland silver appearance, so I hired a friend to paint them with some local flora and fauna. I thought $50 each was a deal and it was beneficial to my retired friend.

Picture 3a. Painted Water Troughs in my Garden

Enamel over a background of base coat primer is used to paint the troughs. The level in the foreground of picture 3a shows my effort to keep the troughs level.

The wicking part of the bed is made using plastic one gallon milk jugs, irrigation tubing or other plastic that can contain water and take up space so that not as much soil is necessary. Friends gave me many jugs, but 20 are needed for each trough, and the COVID-19 quarantine dried up my sources before I could get an adequate supply. So, I resorted to 5-gallon containers; three of these containers filled up much of the trough so only six milk jugs were needed to fill the remainder. I drilled many holes in the jugs/containers to allow water to go in and out as needed. I then added fill dirt up to the half-way point and then filled the top half with planting top soil from Soilutions.

Picture 4 shows many features of these troughs. The trough closest to the camera has plastic jugs and fill dirt; it is ready for the topsoil to be added. If you look closely, you can also see a few coffee nuggets that I got from Starbucks added in for nitrogen! The next trough has milk jugs and 5-gallon containers (close-up in picture 5); it is ready for fill dirt. The third trough is full and already has winter plant seedlings and plants started from seeds in it: carrots, peas, beets and sweet potatoes. The last trough has a few plants started from seeds just beginning to emerge. 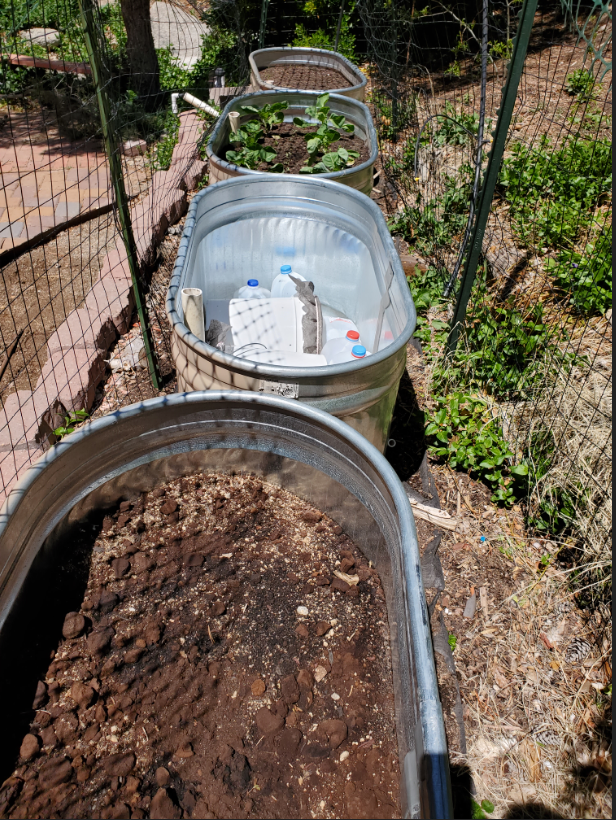 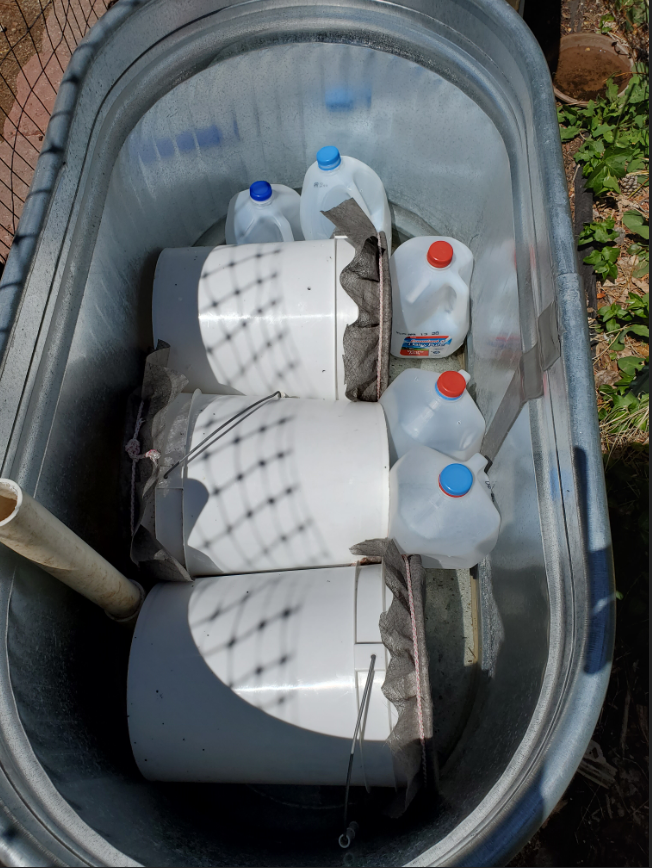 The back of the trough has a drain hole which is lower (1 inch) than the internet sources suggested (5 inches), so I replaced the plug with a 90-degree joint and tube which can alter the level of water in the bottom reservoir of the trough (picture 6). This drain ensures proper drainage I went to Lowe’s with the original plug to ensure I got a joint of the same size. In addition, a PVC pipe can be seen in the second trough in picture 3, which facilitates filling of the trough reservoir. This reservoir in the bottom of the trough should help maintain moisture by protecting the sides and stopping so much drainage as opposed to the bales-it should not require every day watering. Further, it should maintain lower temperatures during the heat of the summer. 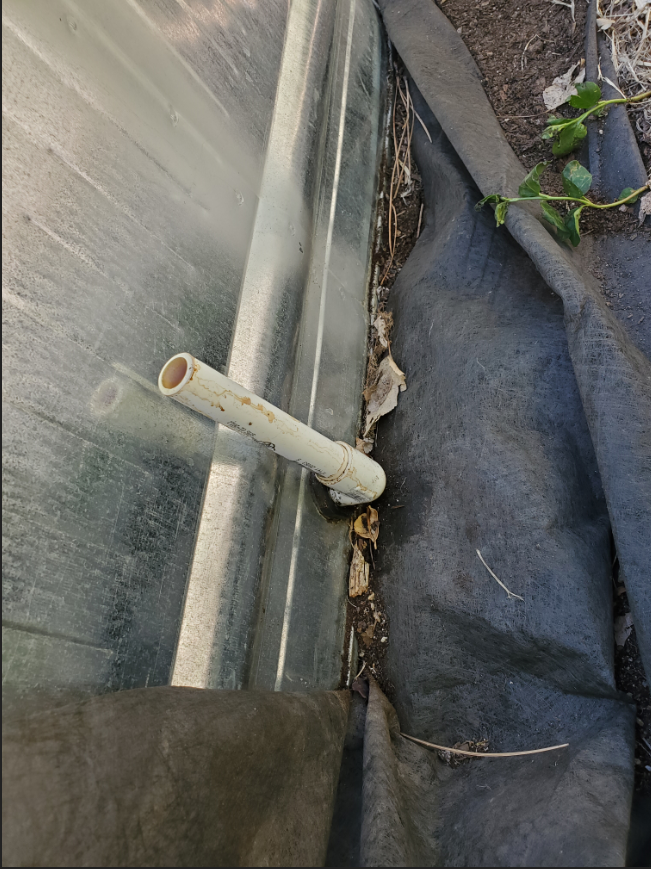