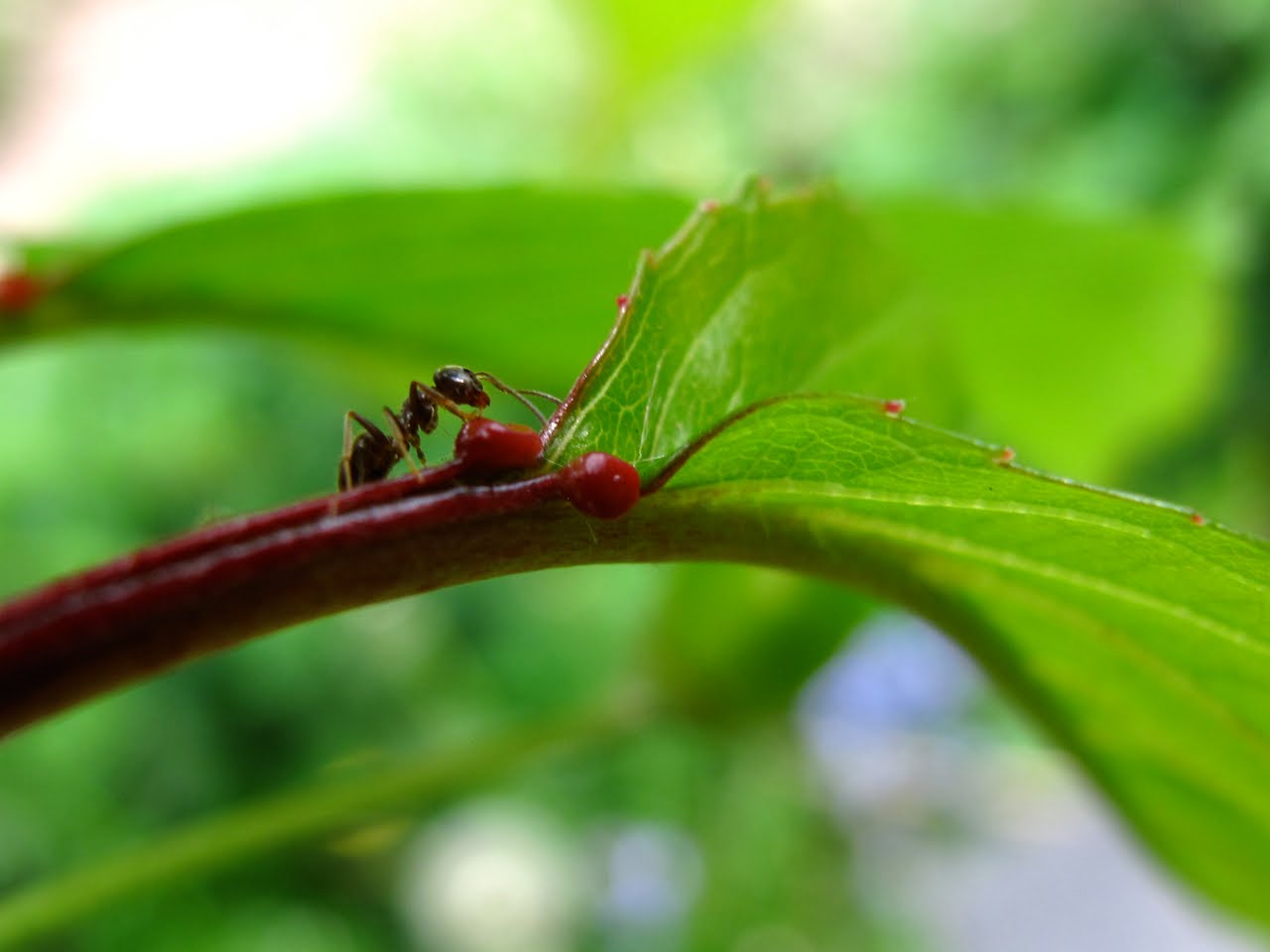 A few months ago Linda Walsh, a 2018 SCMG intern, emailed me (one of her mentors) worried about some spots on her cherry tree. She said they looked like tiny red bugs, but since they didn’t move she thought maybe they were some sort of scale or mites. She sprayed the tree with a light-weight horticultural oil, but didn’t see any noticeable results.

Then, at the SCMG end of training celebration, Linda approached me and told me her continuing sad tale. In my infinite Master Gardener wisdom, I said, “You sprayed with dormant oil, right? That should have taken care of scale or mites. Gosh, that’s weird. Say, did you try these brownies? They’re great.” And I headed back to the dessert table.

But later I started feeling guilty because I hadn’t paid enough attention to her problem. She was obviously concerned, because she had contacted me twice about it. And I sort of blew her off. So I emailed her the next day, saying that I had been thinking about the red spot problem and looking through some reference books.

I summed up the problem this way: (a) There were a lot of red spots on Linda’s cherry tree, (b) the spots were only on the leaf stems, and (c) she had sprayed with horticultural oil without any effect. Then I suggested that we approach the issue like Master Gardeners ought to – scientifically. I suggested that we meet at the Casita and show a sample to the extension horticulture agent, Lynda Garvin. At the same time, we could examine the red spots under one of the micro-scopes in the Casita. Then, if Lynda didn’t know what it was, she would be able to send a photo from the scope to NMSU scientists (like Dr. Carol Sutherland, the bug expert). Mysterious red dots on a cherry tree. Because they didn’t move, the gardener thought they might be scale insects. Photo: D. Vines

It just so happened that Linda was scheduled for her first hotline duty the following Tues-day, with veteran MG Sangeeta Kala McCandless, another of her mentors. So I brought Sangeeta into the loop. Sangeeta said she had just been using the microscope with another intern while they were on hotline duty. She said she would work with Linda on diagnosing the cause of the red spots.

On Tuesday, Linda took a few samples of leaves with red spots when she went to meet Sangeeta at the Casita for hotline.

Sangeeta, being the crack diagnostician and ace microscope operator she is, helped Linda solve her problem in no time at all. “Aha!” she cried, looking at the screen. “It’s intuitively obvious to the most casual ob-server that these red dots are neither scale nor mites, nor any type of insect at all. These are simply ordinary extrafloral nectarines.”

At least, that’s how she wishes it had happened. Actually, Linda researched what they saw on the microscope and figured it out. So, the problem was resolved exactly the way it should have been – Master Gardeners used their many re-sources to research a problem and inform the worried gardener as to what action to take. Which, in this case, was none. And, in this case, the worried gardener was an SCMG intern.

When I got Sangeeta’s email identifying the red dots, I figured she was trying to spoof me, so I googled “extrafloral nectaries” and found the following:

l quantities so they encourage ants to scout around the tree to find the next leaf. Should they encounter a caterpillar trying to get to the leave, or an insect land on it, the ants act aggressively like they would do to defend aphids or scale insects, and keep the insects at bay.

I went outside and checked my own cherry trees, and sure enough, there were the dots. At least on my sweet cherry tree. The pie cherry tree doesn’t seem to have them.

So Linda, Sangeeta, and I all learned something new. And now we’ve shared that information with you. Which is another thing Master Gardeners do.