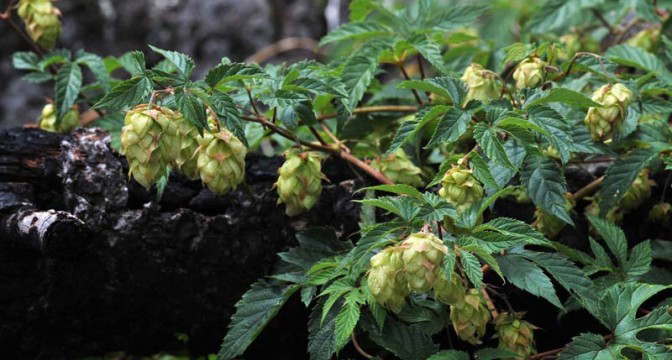 -Southwest Plant of the Month

Humulus lupulus var. Neomexicanus is a wild hop that is native to the streams and river areas of the New Mexico mountains and throughout the Western states region. Humulus (hops) belongs to the Cannabacea flowering family of plants that includes around 170 species grouped in about 11 genera that also includes its more famous cousin, Cannabis (hemp), as well as, Celtis (hackberries).
Below, Sandoval County Master Gardener, Jim Dodson, son Aseph and daughter, Mary-Elizabeth, posing in front of some late season blooms of Neomexicanus in early October, which commonly trellises up and over various small trees and bushes that complement the area, providing a means to stretch upward to the sun. These specimens were found and harvested wild from a secret location to be locally grown in Bernalillo at HOP313, an experimental vertical garden featuring local wild Neomexicanus. 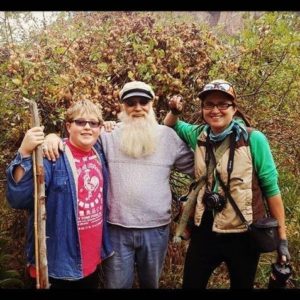 Neomexicanus offers unique high-value characteristics that traditional production hops varieties are lacking. These characteristics include; drought tolerance, hail resilience and it typically tests as disease free because it grows wild and has not been overgrown, which is a serious problem with traditional production hops, which have become diseased because of centuries of over production. Neomexicanus is also unique in that it produces “branching” which creates more cones than some other hops strains.
Brewers Gold is the oldest recognized Hop strain for beer production and most other hop varieties derive genetically from it and are therefore more susceptible to disease. Except for wild hop, like Neomexicanus, which has been left to produce naturally because it was either undiscovered or did not provide the aromatic properties that brewers covet.
In recent years, global warming is having a major impact on traditional hop-producing states such as Washington and Michigan, creating flooding problems that can lead to mold and other diseases that now make New Mexico an alternative location for hops because of our lower cost of land, ample sunshine and less chance of too much rain.
AS a result, New Mexico State University is testing and studying Neomexicanus and other varieties of hops in the Four Corners area to help encourage small farm producers to grow it to supply the fast-growing expansion of small breweries in New Mexico with a locally sourced crop. They even purchased a mobile hop harvester that can come to the farm site and automatically strip the hop cones from the bines.

Last year, global hop producer, Hopsteiner, sent their hop-hunter to New Mexico where they harvested wild Neomexicanus samples to take back for genetic breeding of its special characteristics to produce a new proprietary strain that could potentially be worth millions or more in global production.

While hops are best known as a bittering agent for flavoring craft beers, it has other high value uses including extracts used to help preserve food and beverage products as well as medicinal uses to help reduce pain for women during childbirth and as an aid for inducing sleep, as Alice in Wonderland once discovered when she fell into a long nap beneath a canopy of hops.