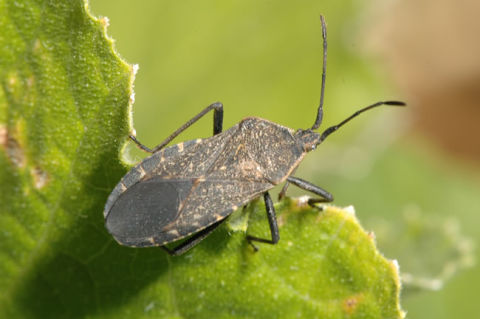 If There’s Squash Bugs in Heaven I Ain’t Staying is the title of Stacia Spragg-Baude’s biography of Evelyn Curtis Losack, woman farmer and water rights activist from Corrales. With all there is to talk about regarding Corrales’ farming, I realized after a summer in Corrales of trying to grow squash why Ms. Spragg-Baude chose this of Evelyn’s many memorable and colorful quotes to title her book. Squash bugs figure prominently in even the most casual conversations about vegetable gardening in Corrales.

As a member of the Corrales Family Practice Community Garden/Harper Family Garden, I have been learning much about vegetable production on a scale at least 10 times greater than my backyard plot from the volunteers who have been working this garden for the past 8 years. As a Sandoval County Master Gardener, I have also tried to incorporate the IPM (Integrated Pest Management) approach to living with these bugs in the garden.

By far the greatest vegetable challenges in our garden are squash and tomatoes. And of the former the greatest, though not the only, challenge are squash bugs. Following is not an extensive list of methods to managing squash bugs, an example of what we tried this year.

They lay their yellow/brown eggs on the underside of squash leaves & on the leaf stem.

When the nymphs hatch, they have greenish/gray bodies with black legs.

Identifying the squash bug early in the season is important for management and vigilance is essential. The Sandoval County Extension Service recommends a first assault on the adult by hand picking the bugs off the plant and eliminating them by “squashing” or by dropping them in soapy water. The same is true of the eggs. “Squashing” may help with dealing with one’s own annoyance at the bugs but if you choose the batter by rock and trowel or between rocks, you must be careful not to include a thumb in the carnage. Nymphs can also be squashed if you are agile and dexterous.

Since our garden has been blessed this year with more volunteers than in previous years, we have been able to “pick & squash” successfully enough to stay mostly even with the bug production. In so doing we have managed to almost completely eliminate the need for spraying, though not entirely.

NMSU IPM specialist Amanda Skidmore also suggests putting some newspaper or a board under the plant at night. The bugs prefer a sheltered area when the evenings are cool and will congregate under it. In the morning there may be some bugs available for squashing or bathing. I can also see a scenario where you could start your morning with a dance routine on a board tapping on bugs! Music suggestions?

So why not just spray and eliminate the nasty annoyance and time-consuming effort of picking bugs instead of fruit? The answer of course is the threat to pollinators. Even the most benign sounding, organic insecticides are still a potential disaster to pollinators.

*One pollinator unique to squash plants is the squash bee of which there are two species (Peponapis species ). These bees are solitary nesters in tunnels underground under squash plants. They fly and pollinate generally in the early pre-dawn hours. They mate in the squash flowers and the male are often found resting during the day in the closed flowers. As pollinators, they are considered more efficient than honeybees. As with many pollinators, their numbers have diminished. For these bees the loss is believed due mainly to the use of pesticides.

When asked how Silver Leaf Farms https://www.eatsilverleaf.com/, deals with squash bugs, co-owner Elan Silverblatt-Buser sighed, looked to the heavens and said “if I had a nickel for every time I was asked that question….,” allowing that the bug dogs the most conscientious of growers.

Silver Leaf manages squash bugs, at least in part, by timing planting to the bugs life cycle. They start plants in the greenhouse in April, put them out after the last frost date, and cover them until the blossoms appear and need pollinating. They plant again in summer after the bugs life has mostly run its course. It is not totally successful as they still lose some plants to squash bugs, but on the scale of their planting the loss is not significant and picking and squashing would be impossible.

Next year at the Corrales Family Practice Community Garden we will add starting earlier to plant seedlings instead of seeds and covering them until they are producing flowers. We will undoubtedly still be picking and squashing as well and maybe planting some suggested companion plants. Hopefully we will deter or redirect those little bugs enough so that they find another unsuspecting gardener to frustrate and educate.

Perhaps a more important learning from squash bugs is how to live with what we consider to be pests while maintaining a broad biodiversity and healthy environment for all. It seems we still have much to learn.

Please contact us with any ideas and garden practices that have helped you bring seeds to fruit.